I arrived just minutes before Ben Hansen from SiFi’s Fact or Faked and did my very best not to rush him like a silly fan the instant that he walked in the door. I checked myself in at the registration desk, went about setting up my table, and spent some time greeting and talking to some amazing people – all while sitting a mere 10 feet from him or less. Finally when the event had started to wind down a bit and I saw that he wasn’t surrounded by people I went over to say hi and let him know that I was a very big fan. He was incredibly nice, very gracious, and every bit as handsome in person as he is on TV. He asked me a little bit about my book and I gave him a sample, a button, and a bookmark. He agreed to pose for a picture with me and it wasn’t until I got home that I realized that Dakota Laden, from ShortFilmzz123, was in the background at his table as well. Two celebrities for the price of one! Ben was one of the nicest and most down-to-earth celebs that I have met so far (and I’ve met quite a few of them!)

A short time later David Dossett, from TAPS West Coast, stopped by to say hi and engaged a fabulous conversation about his personal techniques as a professional ghost hunter, his side projects involving animal rescue and care (Watch for him on this season of Pit Bulls and Parolees!), and his experiences in the film and TV industry. It was such a joy to speak with and learn from him and, again, it wasn’t until I got home that I realized Travis Hill (from Psychic Kids) was in the background! There were celebrities everywhere!

Here I am at my table with books, banner, and poster on display. Kim & Jill from Sin City Spirit Seekers stopped by to invite me to be on their radio show this coming Thursday night and were exceptionally fun to talk to. You can tell that these ladies are best friends as they share the ability to finish each others sentences in a most endearing way. I had so much fun talking to them and can’t wait to be on their show! 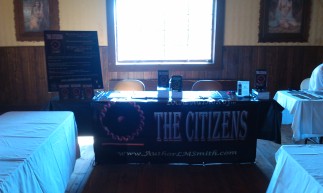 Saturday morning I arrived early and was fortunate enough to get a table around the outside of the vendor loop. I met a variety of fascinating and talented people but the most interesting was Jeff Mudgett, author of Bloodstains. We purchased a copy of each others books and I started reading his last night. I only managed to get seven chapters in before the adrenaline from the Paracon weekend wore off and the post excitement exhaustion set in but, already I can tell that it is masterful and even as I am writing this post I am eager to return to reading it.
Las Vegas Paracon 2012 was a wonderful experience and, for this author’s first signing, couldn’t have been more of a success. I am thrilled with the connections and friendships that I’ve made and I honestly can’t wait for Paracon 2013!